Art in the City is a new series that will be running on the BWAC Buzz from time to time. Do you have a suggestion for an exhibit worth seeing? Let me know.

Artistic genius takes a lot of time and hard work. Maya Lin is well versed in both.

I have a special fondness for trees. I recently completed an animated short CityTREES, part of my Anim8Nature series of short documentaries. So when a friend told me about Maya Lin’s Ghost Forest at Madison Square Park I had to go…immediately. I am a huge fan of Maya Lin’s work. I have visited the Viet Nam Memorial many times and engaged with various of her installations over the years. Ghost Forest has a lot to unpack. It speaks on so many levels. I am still watching videos, perusing the Madison Square Park website and generally collecting information, but I wanted to put down my reaction the day of my first visit (a number of weeks ago). 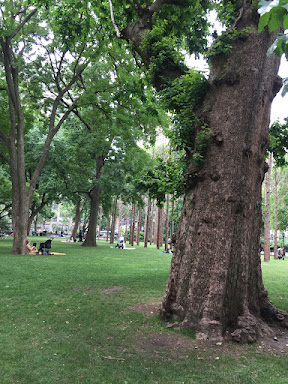 As I entered the park from the south, I was immediately aware of the park’s lush green vegetation and beautiful trees including a spectacular English elm. On closer inspection I saw the Ghost Forest. The 49 Atlantic white cedars are “planted” in the large lawn at the center of the park and stand between 40 and 45 feet tall. They clearly exist in relationship to each other, though not placed in rows. The trees are very much in contrast to the surrounding park trees and clearly not living.

What struck me next was how beautiful they are. The color and texture of the bark is magical. Clay earth red and gray with highlights of blue green lichens run along the vertical pattern of the bark. Each one is distinctively different.  Standing together, the color, texture and gesture of each tree reflect off each other.  In the density of the cedars and other  park vegetation, I was momentarily transported to the woods of my youth. 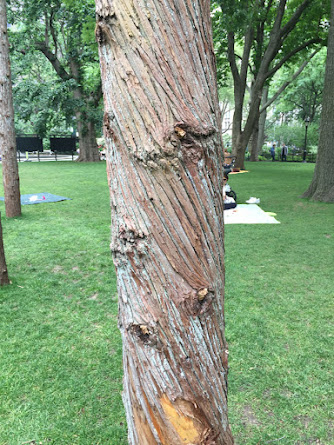 It’s the back story that counts here. This is a ghost forest because these trees were killed by salt water invading their habitat because of Hurricane Sandy. The introduction of salt water to the Pine Barrens of NJ due to that storm was the death knoll for these trees…it takes 3 to 5 years for the salt water to kill them. During that time they are the walking dead.

Of course, it’s all about death. Looming environmental crisis is about organisms dying, humans included. In an interview about her design for the Viet Nam Memorial in Washington DC, Lin talked about honesty and accepting death in order to come to terms with the loss. However, with Ghost Forest, it is about death but not about coming to terms with it the same way. Perhaps acknowledging the deaths present and future is a way to begin to reckon with the consequences of ignoring the realities of climate change.